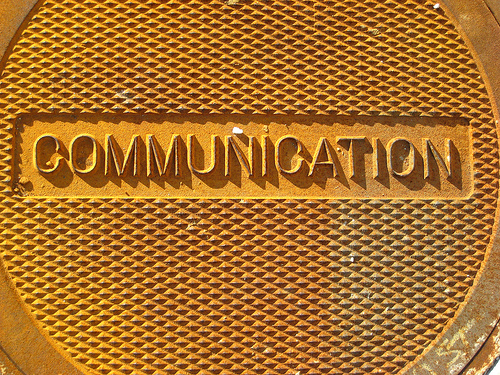 "communication" by erika dot net is licensed under CC BY-NC 2.0

Readings from: B (PP215-225): The Action-Theory of the Early Middle Period (from Volume 2 of Theory of Communicative Action, Habermas, 1987)

Why was Cartesianism such a problem for Parsons? Continuing on from the previous post, we can see how Parsons was dogged by the philosophy of consciousness most clearly in the construction of his pattern variables. In his attempts to avoid conflating action systems with unit acts (i.e., connecting elements directly to elements of the cultural system), Parsons remains faithful to the philosophy of consciousness and the subject-object theory of knowledge, in that the knowing subject’s freedom of choice is held as sacred. It appears that, as in his early period, Parsons cannot give up this freedom of choice as a conceptual tool. With the pattern variables, value patterns still hover on the rim of action orientations, waiting to be chosen as objects. As Habermas puts it (p222),

cultural values function as patterns for a choice between action alternatives; they determine the actor’s orientation by establishing preferences, without affecting the contingency of a decision.

It is the last part of this statement that clarifies the problem faced by Parsons. The intersubjectively shared cultural values that have become internalized in the personality system or institutionalized in the social system, are still treated as something that is applied after the orientation to action. Whether Parsons is attempting to understand how action systems get constructed out of unit acts, or how unit acts get constructed out of action systems, it is apparent that he is still working on the same basic premises. This is nowhere more evident than in the problems that generate the pattern variables in the first place (see pp422-423). These five variables are structured around five basic problems that according to Parsons, every actor has to face. For instance,

should the actor directly pursue his own interests or should he allow for normative considerations in which general interests are brought to bear.

This is the dilemma which generates the self versus collectivity orientation. This problem, like the other four, are concerned with the kinds of values that a solitary actor can orient him/herself to. It is this knowing subject which Habermas rejects in favor of a speaking and acting subject, and it is this reliance on the object-oriented subject of the theory of knowledge which Habermas argues is ‘just the wrong model (for a theory of interaction) (p221).’ Habermas states his own case on page 221:

The structure of action oriented to reaching understanding is a better model for studying how culture, society, and personality work together in determining action orientations. By attending to the formal properties of the interpretive performances of actors who harmonize their actions via communicative acts, we can show how cultural traditions, institutional orders, and personal competences – in the form of diffuse taken-for-granted features of the lifeworld – make possible the communicative interweaving and stabilizing of action systems.

With this statement, we arrive at Habermas’ basic critique in this section. In the previous section, Habermas was concerned with explaining why Parsons could not account for what it means for an actor to orient his or her decisions to values. His critique in this section is obviously connected to this previous analysis, but here he is concerned with explaining why Parsons could not sufficiently account for the connections and relationships between the three action systems and their role in determining action orientations. As he states on page 225,

from the perspective of action conceived as value-regulated purposive activity, we cannot explain how culture, society and personality hang together.

He summarizes his own position and how it differs from that of Parsons on page 222:

The concept of communicative action not only provides us with a point of reference for analyzing the contributions made by culture, society and personality to the formation of action orientations; this model also enables us to get clear about how culture, society and personality hang together as components of a symbolically structured lifeworld. To understand Parsons’ construction problem here, we have to see that he first introduces these three orders in a wholly unspecific manner – as ‘systems’. He is still working with the idea that society can be conceived from the perspective of action theory as a complex of action divided up into these components. Our idea, that the symbolic structures of the lifeworld are reproduced by communicative action, points the way now to a fruitful analysis of the interconnections between culture, society and personality. If we inquire how cultural reproduction, social integration, and socialization can draw upon the same mechanism of mutual understanding, in different ways, the interdependencies among the three lifeworld components come into view.

Habermas is arguing here that his theory of communicative action provides a much more plausible solution to the question: how is social order possible? than does Parsons, as he begins with an intersubjectively shared lifeworld rather than the action orientations of singular actors. There is no need for Habermas to attempt to explain how all the singular orientations can come together to form a social order as he starts on a completely different premise.