Free-falling, Foucault and The Festival of Dangerous Ideas 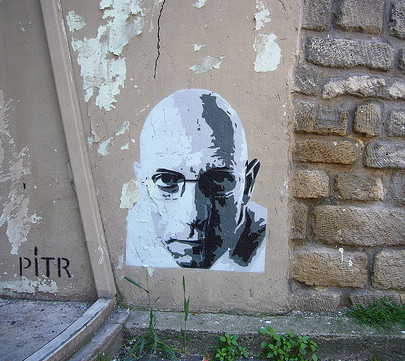 "Foucault" by Cicilie Fagerlid is licensed under CC BY-NC-SA 2.0

These are challenging times for colleges in Scotland. The Post-16 Education (Scotland) Bill has heralded a change in relations between Government, Funding Council and the college sector, with a review of structuring and funding. Regionalisation has brought college mergers, decrease in staffing, curriculum changes, which alongside the implementation of new qualifications and the senior phase of Curriculum for Excellence have impacted on practitioners across the college sector.

So why create an education festival now? Surely with so much uncertainty, confusion and change, a festival that aimed to shift our thinking about education would not be welcome. Well, here’s my account of why I created the festival – my own dangerous idea, putting theory into practice.

Like many lecturers who work in Further and Higher education in the college sector I have spent a significant amount of years (nine so far) engaged in higher education study, predominantly, but not exclusively engaging with  education and social theory. Years that have been woven into the fabric of my working life – years which initially excited, enlightened and enchanted me but as a practitioner could leave me frustrated and disempowered.  Does knowledge set you free or let you free fall?

Although influenced by many social theories, Marxist concepts of alienation and class grabbed hold and provided a neat framework of truth. Everything could be analysed and understood from a Marxist perspective, the answer being clear and obvious – all that was needed was a revolution. I could analyse the college system, the relations between the college managements, the lecturers, the unions, the state but what could I do about it? Like many I had a grand narrative to explain our collective experiences, our frustrations, but there seemed to be little opportunity or impetus to collectivise, create change, to influence the system from the bottom up.

Having knowledge with no sense of how to use that knowledge I think leads to a sense of free fall. The structures and systems that once gave support were being dismantled, but the tools and skills to create or transform were sadly lacking.

Later on in my academic career I was introduced to Foucault, himself influenced by Marx, but offering a different view of reality and truth, a way of questioning  orthodoxy and discourses that has come to influence my practice more than any other theorist.

There are golden moments in our academic or intellectual development, and a hand-out of the preface to The Order of Things where Foucault  (1970) reviews a “passage from Borges”  on a “Certain Chinese Encyclopaedia” proved to be mine. In this ‘Encyclopaedia’ animals are classified by the most extraordinary rules (see below), thus allowing Foucault to make the observation that systems of classification are products of the culture of that time and place.

Animals are divided into:

Belonging to the emperor
Embalmed
Tame
Sucking pigs
Sirens
Fabulous
Stray dogs
Included in the present classification
Frenzied
Innumerable
Drawn with a fine camel hair brush
Et cetera
Having just broken the water pitcher
That from a long way off looks like flies.

“In the wonderment of this taxonomy, the thing we apprehend in one great leap, the thing that by means of the fable, is demonstrated as the exotic charm of another system of thought, is the limitation of our own, the stark impossibility of thinking that.” Foucault (1970)

I realised that the frustration for me was the way in which we discuss (or don’t) the possibilities of education: our limitations. We were trapped into only talking about, thinking about, and considering education within the dominant discourses. This is a discourse shaped by key thinkers, theorists, academics, policy makers in education – undoubtedly important but at the same time creating a realm of truth which was hard to challenge. A circuit of power is reinforced by the structures that maintain the prevalence of a particular discourse based on myths and rules of education, where contradictions and  ambiguities  are played down and alternative discourses not heard.

Alongside these structures are a set of myths that shape rules that govern what we think is possible – the way the curriculum is designed, the institutions that are built, the way teaching is delivered, the role of the learner, the assessments we create and use, what is valued, what is not.

With that understanding I recognised several things:

Where were the other discourses, where were the ideas? To transform education we need to challenge the rules, transform the discourse or make some practices redundant. If we focus only on what is dominant in educational discourse what are we missing, what opportunities could arise at the boundaries of disciplines?  Whose voices, views didn’t have a public platform, and how could they get one?

Power struggles happen at different levels, but ideas have a crucial role in transformation.  Why didn’t people share ideas? The concept of disciplinary power, with the omnipresent fear of being watched and judged, explains self-regulating behaviour, particularly at a time of regionalisation with job redundancies and competition for the few remaining posts. How could we get people to raise their head above the parapet?

Well for me several things occurred. Firstly I realised that you need to model risk taking and be explicit that this is what you are looking for: make the competing discourses the target and give them a platform, bring in the practices and language from other discourses – deconstruction, adventure, creativity, exploration, disorientation and unpredictability. Find a way of conveying that what you want is the ‘other’ and invite those at the margins to the centre stage. Secondly, I aimed to provide an opportunity for those within the major educational institutions to say what they really feel, not just an institutional view. Thirdly, I wanted to offer opportunities for people to share their ideas wherever they happen to be, and through a vehicle chosen by them; and fourthly I sought to encourage an exploration of ideas from different disciplines and education providers.

Competing ideas can be dangerous to the dominant discourse, so why not have a Festival of Dangerous Ideas – with an explicit purpose of transforming education?

The Festival was publicised throughout the education and arts networks, inviting anyone with a dangerous idea to share their idea at one of the events we organise or create their own forum in any geographical location during a time span in June. This decentralises the festival, makes it accessible, but most importantly it provides opportunities for joint professional development. It invites fantastical, future thinking from all those interested in education and how it could be different. It allows the opportunity to consider the other – it may not be completely attainable but it starts to shift thinking around what could be possible, and reinstates ideas as agents of change. But that’s for another blog …

For more information on the Festival of Dangerous Ideas:

I’m Karen Lawson, education advisor and Curator of Dangerous Ideas at College Development Network, the national support agency for staff in Scotland’s’ colleges. Originally I trained and worked in social work and then spent eighteen years as lecturer, senior lecturer and teacher fellow in the Further Education Sector.Currently I organise a national education festival: the Festival of Dangerous Ideas which aims to re-establish the importance of dangerous ideas as agents of change in education – to shift the axis of what is possible! It is for everyone who is passionate about education including college, university, school staff and students as well as those engaged in education throughout the creative communities.If you want to know more contact me Karen.lawson@collegedevelopmentnetwork.ac.ukTwitter: @Dangerous_Ed or @Karenlawson3