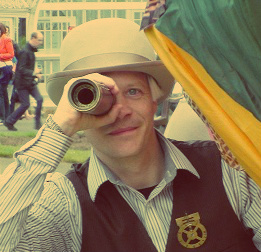 Hello, my name is Dave Talbot. I am a 2nd year PhD student looking at the nature of interdisciplinarity in higher education, and practical undergraduate pedagogies around it. And I’m having a major social theory problem. The problem is: how much social theory understanding is enough for a thesis intended to present a pragmatic recommendation? At what point is it okay, in what is to be a well supported and critical piece of extended research, to say ‘I am content with the level of theoretical underpinning that my proposed model has.’

Nearly all interdisciplinary and pedagogic research in the past several decades is steeped in social theory, many different and conflicting ones. The prevailing models for disciplinarity and teaching are almost universally one type of socio-cultural matrix or another. The trouble comes that these often make only cursory nods, or none at all, to which social theory they are based on and how it has been justified, often citing a quote or two from a well known social theorist, while making broad claims about how best to change higher education. It seems an important thing to hang on so little critical evaluation to me, especially when it quickly becomes clear that many models for change are either incommensurable, even with other models using the same theories, or seem profoundly idealistic. Add to this the general expectation of an ontologies/epistemologies section in most theses, and it is clear that some more direct consideration of social theories is required.

As anyone who has ever looked at the literature on social theory knows, this is a very big can of worms to open. Much of the very recent theory is quite dense, being based on the intentionally cryptic works of philosophers like Butler, Foucault, Derrida, Latour, Pickering and Haraway. Making sense of this most recent wave in its primary source form would be a thesis unto itself. But these models are inexorably based on long debates and variant readings of the previous wave of social philosophers from the first three quarters of the 20th century, such figures as Wittgenstein, Husserl, Heidegger, Gadamer, Habermas, Ricouer, Rorty, Kuhn, Popper Russell, Quine and others. Not one of these authors was lightly published, nor spoke in simple clear terms. It is also at this point that it becomes clear that to talk about social theory in the 20th century, you are also, inexorably, talking about epistemology, ontology and phenomenology. That they are inseparable is probably the only universal theme of 20th century social theory.

In terms of disciplinarity and education, my focus needs to be on the nature of science and the humanities, can they be studied together? Fortunately, or unfortunately, this has been a very big area of discussion for each of the figures mentioned above in one way or another; the real or perceived distinction between the empirical and the interpretive, the objective and the subjective, the real and the constructed, the fixed and the performative. This takes the list of theorists to contend with even further back though, because the criticisms levelled by most post-modern or beyond philosophers are aimed at the Enlightenment Project and the scientific method. This now adds at least Kant, Nietzsche, Hume, Locke and Bacon to my growing list, and takes the date back to 1620.

This is all fascinating, and I really do enjoy it. But here is the rub, my thesis is due in a little over a year, and it needs data collected and considerable non-social theory related work done, and reading critically all of the original works of each of the philosopher’s above would take longer than that on its own. I realise that what I am doing is being reductionist about the theoretical base of my work, and that a great many recent models directly oppose or try to reconcile the need for reductionism, the trouble is they are simply unconvincing in this. I have read too many pragmatic solutions to pedagogic problems which were based on such a notion, which as a result seemed very far from pragmatic. I literally lose sleep over how I am going to provide a sufficiently justified and researched socio-empirical basis for my work, when I am certain that the second I write something about philosopher A or B, a dozen specialists on that philosopher will descend upon me like angry hornets for failing to have considered this or that other reading of their work. Or if that is too dramatic, that one or more of my examiners will be one such individual, and will see right through the fact that I didn’t read every original work by that philosopher.

If you have any feedback or want to get in touch, you can contact me at: d.talbot.1@research.gla.ac.uk