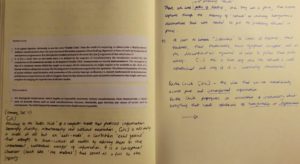 My brain hurts. I have been reading Latour’s book An Inquiry into Modes of Existence (Latour, 2013, hereafter referred to as AIME) and I am almost exactly half-way through. Not just reading, exactly: I have been taking notes (there is always a pleasure in buying a new notebook to start a new project) using a fountain pen, and backing up my reading with copious use of the supporting AIME website (it’s fantastic) which started life as a genuinely interactive vehicle for other people to contribute to, but now remains as a repository of comments and commentaries on AIME as well as other supporting materials, rather like an exhaustive collection of footnotes, or the bonus features that we might find on a DVD. Channelling the spirit of The Slow Professor (Berg and Seeber, 2016), which alongside AIME is the book that I currently draw on more or less successfully to inform my identity as an academic, I am savouring my reading and enjoying the ways in which AIME is making me rethink some of the ideas that I have been nurturing for over a decade now (Tummons, 2010, 2014, 2018; Tummons et al., 2017), and thinking of ways in which AIME might inform my wider empirical research as an ethnographer.

Being an ethnographer (of some sort – I don’t want to get lost in a discussion about anthropological ethnography, multi-sited ethnography, institutional ethnography, and so on) is the ideal approach to AIME and in fact to actor-network theory as well (which is usually abbreviated to ANT – but I shall return to abbreviations in a moment). Those books and journals that are –I suggest – the very best examples of ANT are ethnographies: Organising Modernity (Law, 1994) and Knowledge in Motion (Nespor, 1994) remain, for me, landmark texts, embodying the ‘early’ or ‘classic’ approach to actor-network theory that in turn informs the work done more recently by Gorur (2011) in exploring PISA and which is one of a small number of articles that I genuinely wish I had written. It is this iteration of ANT that I use and that I encourage some of my PhD students to draw on, in contrast to the later versions that seem to me to merge with a broader post-modernism that ultimately prevents any useful empirical research being done, as the discussion descends into theory talk (Thomas, 2007). It is from this perspective that I get confused when people get tangled up in questions of ‘how to do actor-network research’. It’s ethnography. That’s it.

ANT is still with us, but within AIME it becomes just one element of a wider-reaching and more profound inquiry. It’s changed name, for a start, and within AIME is now designated as [NET] – including the square brackets. Indeed, AIME presents us with a number of other similarly designated modes of existence – [REP], [FIC], [PRE] to name just three (and Latour gives us fifteen in total) – which are slowly beginning to be picked up by other writers (Conway, 2016; Decuypere and Simons, 2016). AIME is a pretty ambitious project: it’s an exploration of modernity, an inquiry into ontological pluralism, driven by empirical research. A network in the actor-network sense of the word – which we now know as [NET] – is the starting point for the inquiry, a necessary first empirical step in tracing the connections between things and people, and people and things, that is familiar to those of us who have used actor-network theory in the past. The familiar themes are still here: the immutable mobiles; the collapse of the human/non-human bifurcation through the principle of symmetry; the flat structures; the conspicuous absence of discussions of ‘power’ and other sociological favourites, are all present and correct. But these are now combined with other strands of Latour’s work, including science and technology studies (STS), explorations of modernism, geopolitics, semiotics, and philosophy.

As such, there’s a lot to think about. And I have done a lot of thinking – and learning as well. I find myself using lots of terms or concepts that were more-or-less unfamiliar or certainly unused, if not unknown, aspects of my lexicon a year or two ago: category mistakes; second, or radical, empiricism; speech acts; instauration; veridiction; and (my favourite), felicity conditions. Perhaps most pleasurably, I have found myself changing my mind about stuff, and specifically about the stuff that makes up the ethnographies of education that I usually concern myself with when I am not marking essays,  preparing seminar slides, and writing reports. I could insert some comments about contemporary academic workplace cultures here: indeed, I had AIME on my bookshelf for over a year before I first got round to reading it, and then it got shelved again pretty quickly for another year – all due to the ‘need’ to teach, research and publish. It’s only now, with a bunch of (I like to think REF-ready) peer-reviewed articles in the bank and a fairly recent academic promotion (last year) that I have felt confident enough in my work to step off the writing treadmill and do some reading and note-taking, and some thinking, without having a fixed idea as to where the reading might lead to in terms of ‘research outputs’.

Bruno Latour has helped me a lot over the years, although he almost certainly doesn’t know it, as we have never met and I doubt he reads my stuff. A few years ago, I would have said that ANT has been helpful to me in using communities of practice theory, and I would have gone on to talk about artefacts, humans and non-humans, and so forth. ANT helped me to answer some quite fixed questions. But Latour has gone on to do much more for me. Through AIME, he has got me thinking in a more open manner about all kinds of things that I have encountered in my past research as well as in the new empirical data that will soon be taking up space on my laptop and inside a new Atlas-Ti folder. Latour has got me reading again, and got me enjoying my reading for the first time in quite a while. The fact that my brain hurts is part of what makes it fun – and I think that having a bit more fun in the academic workplace is no bad thing.

Berg, M. and Seeber, B. (2016). The Slow Professor: challenging the culture of speed in the academy. Toronto: University of Toronto Press.

Latour, B. (2013). An Inquiry Into Modes of Existence. London: Harvard University Press.

Tummons, J. (2010). Institutional ethnography and actor–network theory: a framework for researching the assessment of trainee teachers. Ethnography and Education 5(3): 345-357. 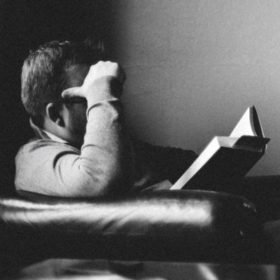 Jonathan Tummons is an associate professor and deputy head of the School of Education at Durham University, UK. He is an ethnographer of education, and is a member of the organising committee for the Oxford Ethnography and Education Conference. He is interested in modes of existence, communities of practice theory (the focus of his latest book, Learning Architectures in Higher Education); actor-network theory; material semiotics; and theories of literacy as social practice. He has published widely on a range of issues relating to learning, teaching and assessment in higher, professional and further education. His current empirical research focuses on learning, teaching and the use of technology in distributed medical education in Canada.